Georges Erasmus, a re 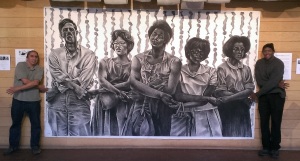 spected Aboriginal leader from Canada, said, “Where common memory is lacking, where people do not share in the same past, there can be no real community. Where community is to be formed, common memory must be created.”

If you look at the extent of our racial problems, especially in places like Baltimore, Ferguson or along the southern borders of our country, you will see that common memory is lacking. For centuries our nation has experienced extended periods of deep racial unrest primarily because our diverse communities do not share a common memory.

For the past several years, I have had the privilege of traveling throughout the country educating audiences on the Doctrine of Discovery and its dehumanizing influences on the foundations of our nation. Teaching people (many of them highly educated) that in the Declaration of Independence, 30 lines below the famous quote “all men are created equal,” the founders of this nation dehumanized the indigenous peoples of this land by referring to us as “merciless Indian savages.” And for a nation that boldly celebrates freedom and holds the Declaration of Independence as part of its God-inspired foundation, that information is extremely traumatic and takes a while to sink in.

But when I go on, teaching about the dehumanizing aspects of our Constitution, Supreme Court case rulings based on the Doctrine of Discovery, the mass hanging of 38 Dakota men ordered by Abraham Lincoln, the 20 Congressional Medals of Honor given to soldiers who participated in the massacre at Wounded Knee, or the US Apology to Native peoples that ended with a disclaimer and was buried in the 2010 Department of Defense Appropriations Act, people are devastated. And that after just a few highlights of our buried history.

There is so much that the majority of our citizens have NEVER been told. And it traumatizes them to learn that this exceptional, God-fearing, freedom-loving, justice-seeking nation they were taught about in their classrooms, is actually a deeply-flawed and systemically-racist country.

But what never fails to impress me, no matter where I speak or who my audience is, is the vast number of people who are open to learn about this history and engage in this dialogue. I think our nation is hungry for community. True community. Vibrant community. Honest community. It is something we have never experienced at a national level but deeply long for. And so the words of Georges Erasmus offer a glimmer of hope. A light at the end of our lonely tunnel. A promise that if we can acknowledge and create a common memory, as painful as that might be, we might just be able to live more reconciled and fuller lives.

Last December, in an article titled “The Doctrine of Discovery- A Buried Apology and an Empty Chair”, I publicly proposed the idea for a Truth Commission. A series of national conferences beginning in Washington DC. These conferences would work to create a common memory through educating people on the Doctrine of Discovery and teaching an accurate history of the United States of America. It would also provide a platform for survivors of Indian boarding schools to share the stories of their experiences.

After traveling, speaking and writing about this proposal for the past 5 months, I do not want to assume that I have the authority to call a national “Commission.” But I do recognize the openness and deep hunger throughout our country to wrestle with this history and engage in this conversation.

So today, through my organization 5 Small Loaves, we are starting the planning of a “Common Memory” Conference, to be held in Washington DC. We have not decided on a final date yet but are looking closely at the fall of 2016. This conference will be similar to the Truth Commission conference described above, minus the official title of “Commission.” If successful, it is our hope and prayer that this will be the first in a series of conferences that will become a foundation, not only for a Truth Commission, but for a Truth and Reconciliation Commission.

I invite you to join this work.

But if we can do it. If we can truly create a common national memory. Then for the first time in our history, real community just might be possible.

How to get involved:

*5 Small Loaves does not currently have non-profit status and is unable to provide tax deductible receipts. We are working to establish a fiscal partnership with another organization that will be able to provide us with a 501(c)(3). We expect this partnership to be finalized in the 2015 calendar year.

One thought on “A “Common Memory” Conference”

To support the work of the Common Memory Project…